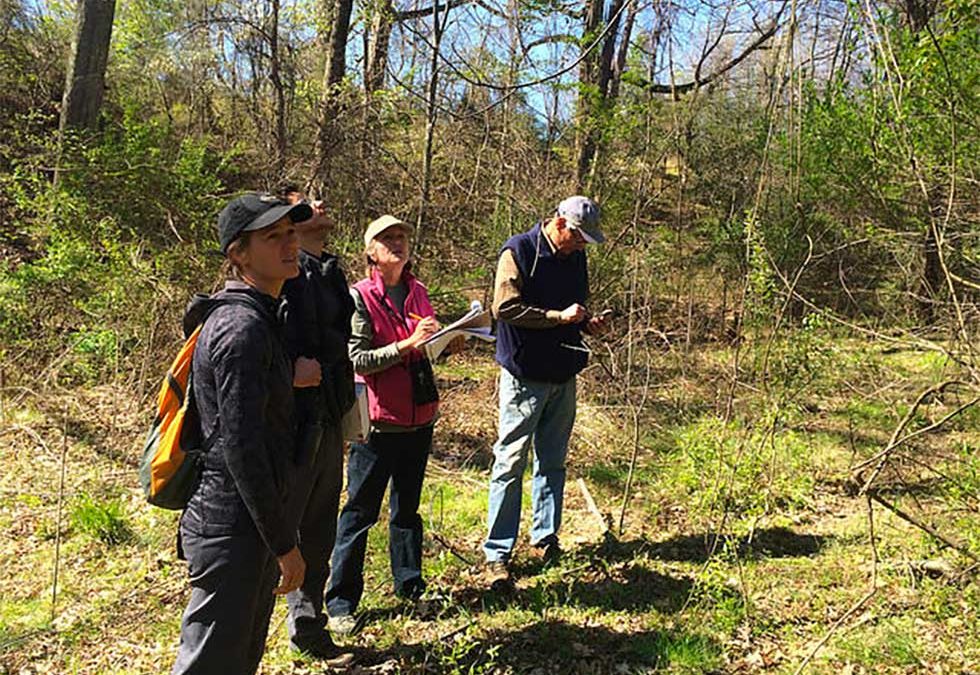 Volunteers have been working since early spring to inventory plants on the site of the future Botanical Garden of the Piedmont. The property is located on 8.5 acres in the northeastern section of Charlottesville’s McIntire Park.

“This survey of plants will establish a useful benchmark,” explained Peter McIntosh, president of the Botanical Garden of the Piedmont Board. “When the garden is designed, we’ll use the inventory to preserve as many of the existing plants as possible.” He added, “One of our board directors, Lesley Sewell, has been instrumental in moving this project along, and we’re extremely grateful to local master naturalists and other volunteers, and to the Charlottesville Parks and Recreation Department, our official partner on the garden initiative, for their involvement.”

More than two dozen tree species—among them Oak, Pine, Ash, Sycamore, Poplar, Walnut and Butternut—were identified by local master naturalists through surveys conducted north of the natural stream that flows into Schenks Branch. Additional tree surveys south of the stream are planned. Master naturalists and other volunteers participated in a BioBlitz on April 16 that focused on identifying spring herbaceous plants and shrubs. BioBlitz events involve interested adults, youth and children working alongside experts and scientists to conduct surveys. Additional BioBlitz events may be conducted on the site in the future to identify other species, such as insects and animals.

Master Naturalist Randy Page coordinated the plant BioBlitz. “The field areas we surveyed during the BioBlitz contain mostly invasives such as Autumn Olive, Kudzu and Japanese Knot Weed,” he said. “We found only small and isolated plants of interest, such as a few colonies of ferns and goldenrod.” He continued, “The most mature and largest trees are [Tulip] Poplars located around the stream where there is more light and moisture, and the soil is better because of wash. Beyond the stream, the biggest stands are Pine. Many trees are overtaken by invasives.”

Sewell, a certified landscape designer, added, “An invasive species management plan will be developed for the garden in the future.”

To become involved, email info@mcintirebotancialgarden.org or call 434.977.7831. Follow the garden on Facebook, Twitter and Flickr. Tax-deductible contributions to help build the garden may be made via PayPal through this website’s homepage or mailed to 624 Davis Ave., Charlottesville, VA 22901.

Rodney is also a lifelong gardener and landscape designer.  Presently, Rodney and Alexandra are embarking on their third extensive residential garden/landscape project for themselves and are also members of several local garden and horticultural venues dealing with environmental and native habitat issues.  Rodney and Alexandra have also visited many gardens and botanical gardens in both the US and Europe and are very enthusiastic about being involved in the advent of the McIntire Botanical Garden (now Botanical Garden of the Piedmont).